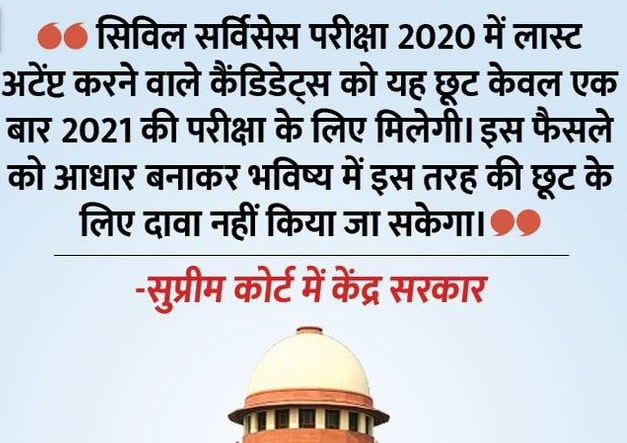 Last year candidates who appeared in the UPSC exam will get another chance this year. The UPSC said this in a hearing in the Supreme Court on Friday. This will benefit those candidates who have appeared last in the last examination.

UPSC Civil Services Examination (CSE) can be attended by any candidate up to four times. In such a situation, taking the exam for the fourth time is called the last prompt. The candidates who had appeared in the UPSC Civil Services Preliminary Examination (CSE-2020) filed a petition in the Supreme Court. There was a demand to give it an extra chance.

The Center said- There will be another opportunity with conditions, the
Central Government said in the court, ‘Last Attendants i.e. the last tried candidates in the Civil Services Examination 2020 can be given a chance with conditions. The condition is that such a candidate should not be a bard, that is, he has not crossed the age of appearing in the examination. The Additional Solicitor General said in the court, “This exemption will be given only once for the 2021 examination to the candidates with last attachment. Based on this decision, no claim can be made for such exemption in future.

The Supreme Court had summoned the records from the Center
, during the hearing last week, the Supreme Court had asked the Central Government and the UPSC that why the candidates who were deprived of the exam due to Corona cannot be given another chance The court had asked the Center how many times candidates have been given additional opportunities for the examination earlier.

Earlier, the government was not ready to give an additional opportunity.
Earlier, the counsel appearing for the central government had said that the government was not ready to give another chance to such candidates and the reason given in the affidavit. To this, the petitioner sought time till January 27 to file a reply. The court had directed the central government not to issue any notification for the new year until a decision is taken in this matter.