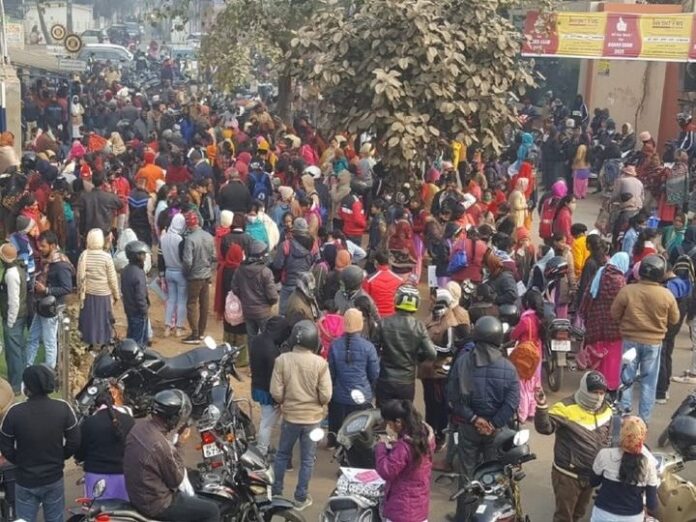 The Intermediate Annual Examination 2021 of the Bihar Board’s biggest exam in the Corona era started on Monday. Examiners started arriving at many centers in Patna since morning. Children’s entry started at JD Women’s College in the capital at 8:40 am. Earlier, the hand clock was also opened. The bag was kept outside. This time 13,50,233 students are giving inter examination at 1473 centers in 38 districts of the state. It consists of 7,03,693 students with 6,46,540 girl students.

All arrangements have been made at the Model Examination Center of the capital. Girls are being given entry by putting them in line. In view of the Corona Guideline, a sanitizer has been arranged at the gate. Entry is being given inside the center only after thermal screening. At many centers, the candidates reached two hours before the examination started. A large number of parents appeared with the examinees.

The examinees arrived at the examination center wearing slippers.

On the stance,
it has been given clear instructions to follow the Corona Guideline regarding the Corona Guideline Inter Board Exam. However, many centers are not being taken care of. Social distancing was put on hold at KB Sahay High School Sheikhpura. The temperature machine and sanitizer lie on the bench. Thermal screening of candidates has also not been done. He was also not given sanitizer. At the center gate, the face of the examinees who were lined up, saw their face removed.

BN Collegiate School’s gate was closed at 9:16. Students arriving after this had a lot of trouble. He kept on requesting to open the gate. But after a long time he was given entry. Many of the examinees arrived here late at the examination center. A teacher was also given with him. Shortly after revealing her name near the gate, the teacher also got entry. The late children were also reprimanded and admitted to the examination center.

At the same time, near the Government Girls Inter School in Bhagalpur, some candidates were seen preparing for cheating. Some were seen sitting in the auto and writing on the copy, and some were seen making chits on the bike itself. Asked about this, he said that he is writing to remember before the exam.