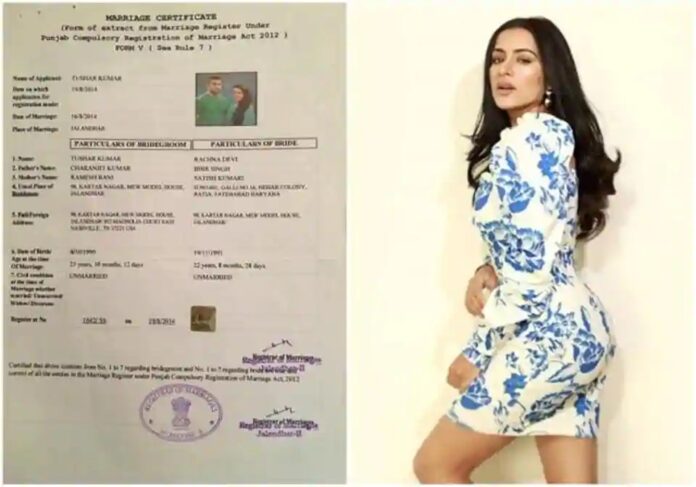 Bigg Boss 14 has started from 3 October. As soon as the show starts, Contestant Sara Gurpal is seen getting into trouble. In fact, Punjabi singer Tusshar Kumar claimed that Sara married him in 2014. She said that Sarah was claiming in the premiere episode of Bigg Boss that she was single. Tusshar has also shared marriage certificates and photos to refute Sara’s claims.

Tushar said, “I got married on 16 August 2014 in Jalandhar, Punjab.” On the question of why he is sharing such details now, he said that he had to do so after Sara claimed to be single. He said, “I was receiving messages on Instagram and WhatsApp from people all over the world, while Sara is still claiming that the girl is not the one who married me. The girl who married me is Sara’s Looks just like that. ”

Surprise! I know you guys couldn't hold the excitment to see me in the BB house! Get ready for some great fun ahead. It is going to be a fun ride. Tune to @colorstv daily and keep supporting me. Outfit by : @iamkenferns #sarakehndi #sarainbb14 #bigboss14 #bb14 #biggbossupdates @vootselect @colorstv @beingsalmankhan

According to a report in Hindustan Times, in the pictures shared, Sara is posing with Lusshar. She is wearing sindoor and traditional red bangles, which are mostly worn by married women. However, in the marriage certificate that Tushar has shared, the girl’s name is Rachna Devi.

Tusshar said that Sara was lying about her status and they got married to be famous. He said, “I just want to prove that Sara is the one I am married to and she is lying to the world that she is still single.” I think he married me to be famous and get USA citizenship. But they left me because they did not get any publicity from me. ”

It seems that even the contestants of the show are not satisfied with Sara’s image. Contestant Shahzad Deol of the show claimed that Sara is ‘playing innocent and kiddish’. He has claimed that he met him two years ago and knows him professionally. Shehzad claims that she is not as ‘bubbly and kiddish’ as ​​she is behaving in the Bigg Boss house.