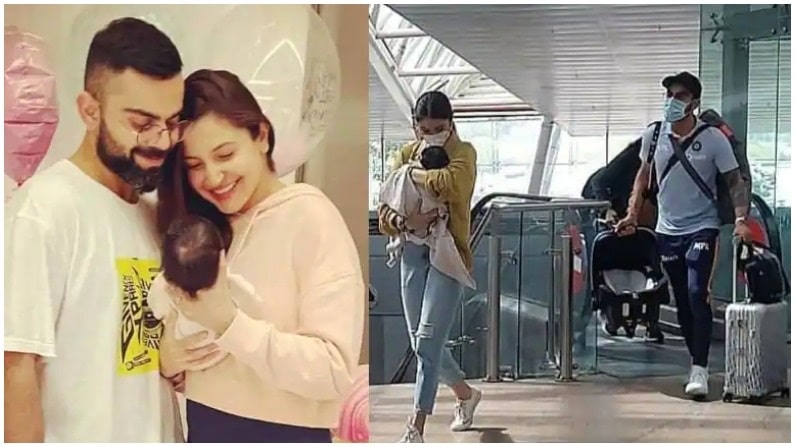 Bollywood actress Anushka Sharma has been away from the screen for quite some time, but she is still close to the hearts of the fans through social media. Recently, Anushka Sharma has given birth to a daughter. He also shared the picture of his daughter on social media. He named his daughter ‘Vamika’ (Vamika). The actress recently celebrated Vamika’s two-month birthday in March. Now recently, Anushka has been seen at the airport with her daughter in her lap.

The actress became a mother on 11 January. The actress used to share her photos during the pregnancy. On February 1, Anushka Sharma (Anushka Sharma) shared the first picture of the daughter on social media after the birth of the baby girl and has also revealed her name to her fans and followers. Now Anushka is seen at the Ahmedabad airport with husband and daughter.

India won 3–2 in the 5-match T20 series played between India and England in Ahmedabad. In such a situation, the Indian team is now leaving for Pune for their further matches. Meanwhile, Virat Anushka is seen with her daughter at Ahmedabad Airport. Special photos of the three are becoming increasingly viral on social media.

In the photo that is going viral on social media, we can clearly see that Anushka’s daughter is seen wearing a green color top, but her face is not visible. The actress is seen wrapping her daughter and only Vemika’s head is visible. On the other hand, in the picture, you can clearly see that Virat is holding his daughter Vamika’s baby stroller in his hands. Fans are praising Virat for his looks in this way for his daughter.

Let us tell you that Anushka Sharma and her daughter Vamika also reached Ahmedabad to see the match that was going on between India and England in Ahmedabad. The first such photo fans of these three together got to see.

On Sunday, Anushka shared her cute photo after having a daughter. In this photo, the actress looks very fit. The actress looks fit and beautiful as before. Looking at the photo, it seems that this is a photo from the actress at the time of her workout.

Recently, Anushka posted a picture on Instagram, in which she was holding the daughter in her lap. In the photo, Anushka and Virat were smiling and looking at the daughter with love. Along with the photo, the actress also revealed the daughter’s name. Virat-Anushka has named her dear Vamika (Vamika). Vamika is synonymous with Mother Durga.