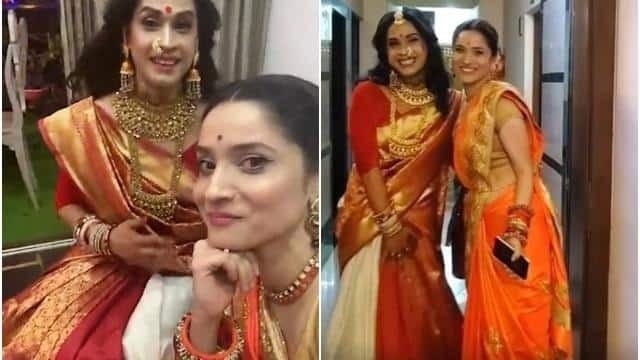 Actress Ankita Lokhande keeps in the headlines every day about her personal life. Once again, Ankita has shared a video of her celebrations at her home with fans, which is becoming very fast. In fact, the celebrations of his mother and father’s wedding anniversary were done in a different way recently at Ankita’s house. Ankita invited such guests for this celebration, which remains the subject of discussion.

These guests are none other than Kinnar Pooja Sharma, who entertains people walking around in the local train of Mumbai. Ankita Lokhande has also shared her video with Pooja Sharma, in which Pooja is seen preparing Ankita, her mother and sister. Ankita is famous for doing something different, in such a way, he found the way of solubration, his fans are also very fond of it.

In the pictures and videos of the celebrations that have surfaced, you can see that at many places Pooja can be seen dancing with Ankita Lokhande and her family. As soon as Pooja reaches Ankita’s house, she first touches his frame and only then goes into the house. This full video has been shared by Ankita. Which is fast becoming viral. This video is being well liked among Ankita’s fans.

Along with this, let us tell you that Ankita is also dominated by her relationship with Vicky Jain. The actress is very active on social media and by sharing her wonderful photos and videos from day to day, the fans keep sharing updates related to their personal and professional life.