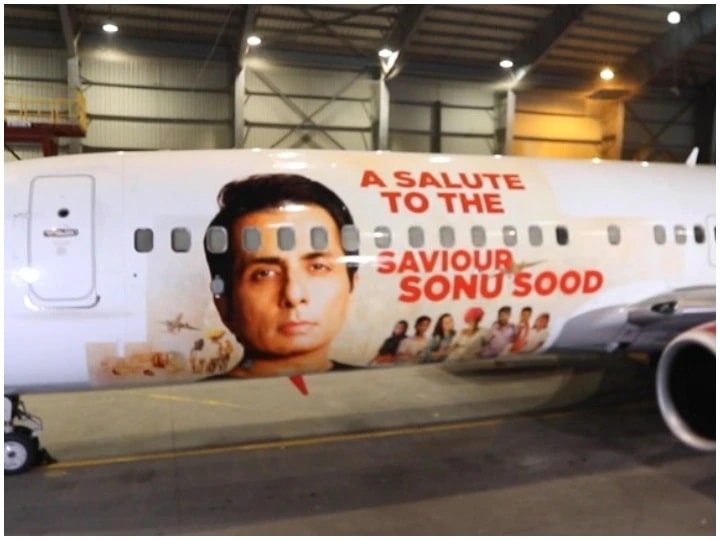 Mumbai: Actor Sonu Sood has now taken a new ‘Udaan’. Sonu Sood, who helped millions of laborers and poor people to reach their homes by buses, trains and airplanes for free in the Corona epidemic last year, has received many accolades and all kinds of accolades in the country and abroad. But now a domestic airport company has honored Sonu Sood in a unique way for his commendable work.

Domestic aviation company Spice Jet, while saluting Sonu Sood, has carved a big picture of him on his company’s Spyjet Boeing 737. A special line in English has also been written for Sonu with this picture – ‘A Salute to the Savior Sonu Sood’ meaning ‘Salute to the Messiah Sonu Sood’.

When ABP News contacted Sonu Sood about this new ‘Udaan’, they seemed very happy about the honor received from Spice Jet.

Talking to ABP News over the phone, Sonu said, “It is a great honor for me. It reminded me that when I came to Mumbai for the first time, I came here through an unreserved ticket. Now when Spice Jet If I have given this honor, then I am feeling very humble and at the same time I am feeling very proud. I cannot tell how good I feel. “

Remember coming from Moga to Mumbai on an unreserved ticket.
Thank you everyone for all the love. Miss my parents more. @flyspicejet pic.twitter.com/MYipwwYReG

He adds, “A lot of people have their prayers, especially those I met during lockdown. I have been able to achieve all of them because of their prayers. They say that I have not reached the sky and are touching the sky Huh.”

It is noteworthy that during the pandemic, not only did Sonu Sood help millions of poor people stranded across the country to reach their destination but also Indian students stranded in various places around the world like Uzbekistan, Russia, Almaty, Kyrgyzstan. Had helped. Along with this, Sonu also provided assistance to all the doctors and frontline workers working during the epidemic.