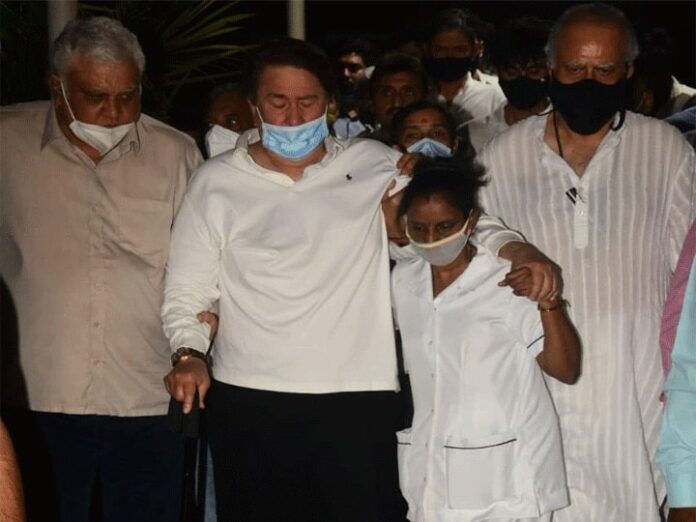 On Tuesday evening, the late actor Rajeev Kapoor merged with the five elements. He has been cremated following the Hindu rituals through the entire legal system. There was a sudden news in the afternoon that Rajiv Kapoor has died due to heart attack. Elder brother Randhir Kapoor told that he was also admitted to hospital after a heart attack but could not be saved.

At the same time, as soon as the industry got information about the demise of Rajiv Kapoor, his residence celebs reached. Apart from Ashutosh Gowariker, Shah Rukh Khan, Sonali Bendre, Raza Murad, Tara Sutaria, Anil Ambani, Sanjay Kapoor, Chunky Pandey, many people came to pay their tributes. The entire Kapoor family also appeared there during this time.

Actor Rajeev Kapoor merged with Panchatattva, reaching out to these stars and tying up the inconsolable family

Kareena Kapoor may give birth to her second child next week. Her delivery date is being told only for the next week but as soon as she came to know about the death of uncle Rajiv, she immediately reached there with mother Babita and sister Karishma.

Randhir Kapoor got a big shock

The Kapoor family lost little Rishi Kapoor 10 months ago and now this second setback has hit Rajiv Kapoor . Especially for Randhir Kapoor, he has lost both his younger brothers. Today he looked very emotional and inconsolable throughout the day. People were seen handling them even in the last journey.

Actor Rajeev Kapoor merged with Panchatattva, reaching out to these stars and tying up the inconsolable family

Nephew Ranbir Kapoor shouldered him in his last visit to uncle Rajiv Kapoor. And followed every custom of funeral. Ranbir also looked very sad on this occasion. As soon as Ranbir came to know about his death, he reached there with mother Neetu Kapoor.