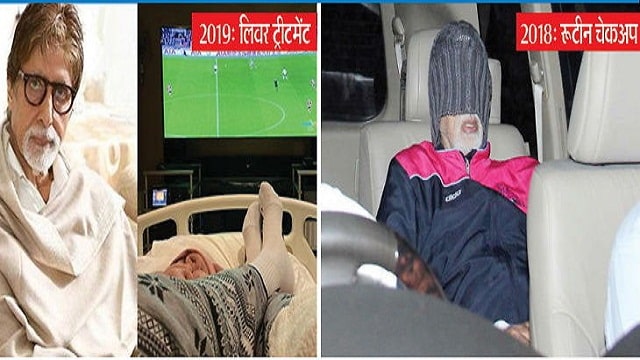 Ever since the Bollywood superstar Amitabh Bachchan came to Corona positive, there has been a sensation across the country. Along with Big B, his son Amibhesh Bachchan is also admitted to Nanavati Hospital for treatment of Kovid-19. Even before this, Big B has been admitted to the hospital due to serious problems many times.

Amitabh was admitted for kidney treatment at Nanavati Hospital in Mumbai on 15 October 2019 before being treated for corona. However, this news was kept completely confidential. Big B’s makeup artist Deepak Sawant gave her admission as a routine checkup. After Big B was admitted, the shooting of KBC 11 had to stop suddenly in the middle. Big B was discharged from the hospital after about 3 days of treatment.

In 2012 also, due to surgery, he was hospitalized for 12 days. He was donated blood by 200 people. During an interview, Big B had said that one of the donors had hepatitis B during that time. The same thing happened to him. He told that in a routine checkup in the year 2000, it was revealed that my liver was infected. Please tell that Amitabh Bachchan is alive with only 25 percent of his liver.

In 2008, a few days after Amitabh’s birthday, he was admitted to Lilavati Hospital on 11 October. He had persistent complaints of abdominal pain.

On 26 July 1982, during the shooting of ‘Coolie’, Amitabh Bachchan was injured during an action scene. As soon as the shooting of the scene started, Bachchan saheb jumped on the wrong timing. Due to this, the punch of Puneet Issar, which was supposed to come out by touching Big B, became fast. Not only this, a table lying nearby was also placed on his stomach. His stomach membrane (which keeps the abdominal organs connected and protects them from chemicals) and the short end were torn. He underwent surgery in Bengaluru.

After 4 days after the accident, there was some improvement in his condition, but the next day when the condition deteriorated again, he was brought to Mumbai and admitted to Brichandy Hospital. Amitabh had almost died. However, the doctors’ efforts and fan’s blessings paid off and on September 24, 1982, he recovered and returned home.