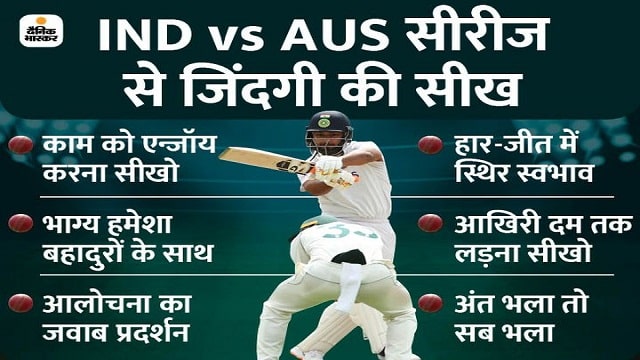 Vijay Dahiya, who was commentating in the first Test match of the Border-Gavaskar Trophy, was disappointed when the entire Indian camp was saying these things. The fellow commentator said, “Yes, it is really a scorecard, no batsman could touch the figure of ten.” This is a historic defeat for Team India.

After this match, captain Kohli went on the paternity leave and the team’s command was handed over to Ajinkya Rahane. Team India has defeated Australia 2–1 in the 4-match series today despite injury to all the legendary players.

Many theories like Fight Back, Bounce Back are now being given for Team India and Ajinkya Rahane, but can there really be something to be learned from this 4 match Test series and Rahane’s captaincy …

How were the conditions in the match: Excluding Pujara, Rohit Sharma and Rahane, the experience of the team players was less than 10 matches. While six players including Australia’s Steve Smith, David Warner, Mitchell Starc had more than 50 matches experience.

Learning for Life: Management Guru N. Raghuraman says, ‘I am new, I am a small child, the front is very powerful. By forgetting such things, the capacity that is within you should be demonstrated. This is what the team did. Freshers should not take too much pressure on themselves.

How were the conditions in the match: Team India scored 326 runs in the first innings of the second match. Rahane scored 112 runs in this. He faced 223 balls, running out to score another run. He scored an unbeaten 27 in the second innings.

Learning for life: The leader is the one who stands up in front of himself and throws his full strength instead of getting angry at others when the team faces difficulty

How were the conditions in the match: Ajinkya Rahane selected young batsman Shubman Gill in the second match for the opening. Rishabh got an opportunity for wicket keeping instead of Saha. T Natarajan, Shardul Thakur and Washington Sundar played in the fourth Test.

Learning for life: A better team leader becomes one who understands the circumstances and environment and chooses his team. He has confidence in the players of his team. Make decisions at your own discretion rather than making decisions that are easy and predictable.

4. Enjoy what you do

How were the conditions in the match: Indian players struggled for runs before Rahane hit the ground in the fourth Test. He started playing shots as soon as he arrived. Similarly, in the fourth Test, Pant hit 9 fours and 1 six in an innings of 89 runs.

Lessons for life: Both came on the field under pressure, but instead of batting tied, they enjoyed their innings.

5. Don’t be too excited, don’t be afraid, keep calm

How were the conditions in the match: Rahane did not celebrate very aggressively even after scoring a century in the second Test. He was calm even after winning the series. The team on the verge of defeat in the third Test was not intimidated.

Learning for life: Rahane’s temperament taught aggression properly. Under his captaincy, not only did the players feel safe, but they continued to do their work in peace.

6. Do not give up until the last moment

How were the conditions in the match: Hanuma Vihari scored 23 off 161 balls in the third Test. Hanuma was injured during this innings and was unable to run, but he did not lose patience. Ashwin also stood with him and pulled India out of defeat.

Learning for life: Like others, Vihari was not influenced by the surrounding environment or the things of the people. He was not selected in the IPL. They were said to be hardworking, but have limited qualifications. Vihari taught not to give up.

How were the conditions in the match: First line bowlers like Mohammad Shami, Umesh Yadav, Jaspreet Bumrah, Ashwin and Jadeja were dropped in the series. The injury to KL Rahul and Hanuma Vihari also raised concern. In this hour of crisis, Team India worked on Plan-B and expressed confidence in new players.

Learning for life: Not everything in life is the same as we think. Circumstances can mess up any equation. In such a situation, if Plan-A fails, Plan-B should be kept ready and it should be trusted.

How were the conditions in the match: The boldness with which the Indian batsmen performed in the third and fourth Test matches made the Australian captain nervous. Sunil Gavaskar said that captain Tim Paine was nervous and the effect was reflected in his bowling changes and fielding. At the same time, the Indian players were performing well while keeping their plan.

Learning for life: If you try with all your heart keeping your goal in mind, luck also supports you. Well-known author Paulo Kolho writes that if you want something from the heart, it takes all the work to introduce it to you.

9. Respond to criticisms with your performance

How were the conditions in the match: Amid controversies during the series, Australian captain Tim Paine told the Indian team, “See you at Gabba”. The Indian team did not immediately respond to this provocative statement, instead responding to its performance. This is Australia’s first defeat in the last 32 years at the Gabba ground.

Learning for life: Many times in life people will criticize you. Will try to provoke you. If you try to answer them by talking, then you can deviate from your goal. Criticisms should be answered with their work.

How were the conditions in the match: Australia defeated India by 8 wickets in the day-night Test played in Adelaide. India’s second innings was reduced to 36 runs. This was the smallest score in the history of Test cricket in India. At the same time, no Indian batsman could touch the double figures in the second innings. Despite this embarrassing defeat, India captured the series.

Learning for life: Many times there are initial setbacks in our plan, we give up there itself. But, from this series, we get to learn that through continuous effort, initial failure can be overcome. It has been said – all is well for the end.